skip to main | skip to sidebar

Make Up Your Own Title

Have you ever had something you'd like to blog about but didn't because you were obsessing over it and who really wants to listen to the blatherings of an insane person? Nah, me neither. Gah, just typing that sentence made me think about it again.

I shall take a moment to think happy thoughts.
.
.
.
.
.
.
Okay. Better. Now I will talk about stupid shit to take my mind of off the fact I will have to speak to a bunch of people about personal things in a week. Hey, on the bright side - by this time next week it will be over. Hopefully, it will be all over. Or maybe a new phase will begin that will make this one look like a cake walk. Damn, where was I? Oh yeah. Stupid, fluffbally things...

Our cable service has been acting up so yesterday the repairman came out. Tiny Dog saw him as an immediate threat and wouldn't stop trying to lick him to death so I stuck her in the bathroom. After 15 minutes of listening to her shrieks coming from under the crack in the door (she had her face pressed up against it so hard that I could see the tip of her nose smooshed under the door crack), I couldn't take it and started thinking of where else could I put her. I remembered that once she got in a cabinet on accident and was so afraid of the dark (or whatever) that she didn't bark. I found her there, as still as a statue about 45 minutes later when I was looking for something. I didn't want to stick her in the pantry with witnesses company in the house. I popped her into the closet in LB's room instead.

For the first several minutes all I heard was a pitiful "meep - meep!" from the room but after a bit she began her regular scream. About 20 minutes after that began, she fell silent. "Good. The little bitch has learned who is boss and she's going to shut up til I let her out!", I thought. Ha-freaking-ha. After the repairman left, I opened LB's door to see that Tiny had slammed her body into the door hard enough to shove it open. (The doors don't have latches. They're two small doors with a hinge in the middle and you slide them open.) Once out, she celebrated freedom by finding LB's Easter basket and eating a package of chewing gum. It was a full package and she ingested 2 pieces. As soon as I opened the door, she hauled ass out of the bedroom and hid under the couch. I couldn't really scold her for eating the gum since I had tried to lock her in a closet. I figured since she managed to escape that the gum could be considered the spoils of victory.

I guess dogs are kind of like kids. You should check on them if they suddenly become quiet.

LB gets in my car after he gets out of school and I notice he's all red in the face.

Hey, kiddo! How was your day?

Fine. (in a sullen voice)

No. (in the same tone) Mom came to tell me hi by the flagpole when she was leaving with all of those kids. (LittleBrother's job after school is to take the flag down. It's usually him and a few other people.)

Well that's nice that you saw her.

But she had all of those kids with her. (Her own other 2 kids and 2 of her stepkids) They were all there. And lots of kids from my class were standing around.

They were all there! All of those little kids were with her!

Um, I'm only asking this because you seem a bit flustered. Did that embarrass you or bother you?

Uh-huh. I don't know why she had *insert stepdad's name* kids with her. I thought she picked them up after coming to school to pick up my brother (LB's half-brother that she sends to LB's school out of convenience).

I didn't really know what to say to him. I told him that I was sorry that he was embarrassed and that if I ever do anything to embarrass him that he can tell me and I won't get upset. Should I have said something to defend his mother? I've never said anything bad about his mom in front of him but then again, I've never said anything really good about her either. I just try to not talk about her with the boys.

I can understand where he's coming from. His mom, all of a sudden, introduces him and his 3 siblings to some guy and his 3 kids and they're all supposed to be one big happy family. It probably doesn't help that she was dressed like a disorganized hoochie-mama today and all 4 of the kids she was towing were waving sticks around like loons. It's better that I didn't say anything to try and defend her because it wouldn't have sounded sincere.

There have been a couple of instances in the past couple of weeks where she wasn't able to attend an extracurricular activity of LB's because she had something to do with her new husband and his kids or she had to leave early because of the other kids. I don't think she realizes how the choices she makes effects LB and BB. She told Sweety that she had made previous commitments. Didn't she make a commitment to LB and BB when she squirted them out? 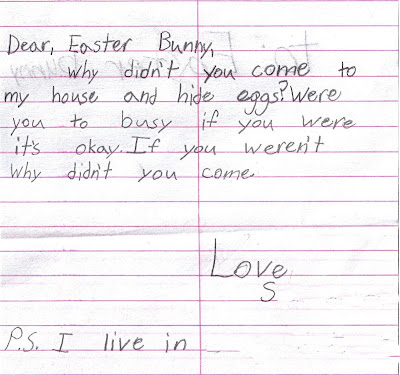 Before Easter, my niece (Sylvie-almost 9 y.o.) told her mom (my sister) that she knew that the Easter Bunny wasn't real. So my sister did not have the E.B. visit the house on Easter morning. Sylvie got a cell phone on that day as an early birthday present (her bday is next week) and called me on Sunday, Monday and Tuesday and talked about how the E.B. came to everyone's house but hers. On Sunday she told me that maybe he wasn't allowed on base (they live on the military base) and during the other phone calls she said she looked out of her windows and saw eggs in everyone's backyard but hers so he had clearance to get on the base. Maybe he didn't know where she lived?

I said something to my sister about this yesterday and she was surprised because Sylvie hadn't said anything to her about it. She asked my niece why she didn't mention that the E.B. didn't come by and said that Sylvie should write him a letter. My sister is going to give the letter a few days to reach him in the mail and then E.B. will visit my niece. Poor niece.

Mike has been feeling a bit punky and he said that his doctor said that pictures of boobs might help him get well sooner. If he would put that on the internet then it must be true, right? So, for purely medicinal purposes, here are mine. That link is not safe for work.
Posted by Chickie at 6:22 PM

Can I be boldly honest with you?

I am always ALWAYS anti-step parents and the way COAEW is behaving is EXACTLY why.

And... I think you are probably my only exception to dislike of all people remotely step-parenty. Blame my father and the wicked witch of the west.

Defend her? Bullshit. You know what I think I might have told the poor kid?

"You know what, kiddo, it's NOT cool that your mom did that to you and it's not cool that she doesn't acknowledge or realize how it made you feel. It's totally ok for you to be embarrassed or pissed off at her. You don't deserve that, but you know what, your dad and I love you and we think you are pretty darn special."

Those poor boys need someone to validate their feelings and let them know it's totally cool to have them.

Yeah, I know she's their mom but just because she managed to survive childbirth doesn't automatically give her any special perks. She needs to get her shit together and grow the fuck up and, preferably, get herself fixed.

Until then... fuck it, all gloves would be off in my book. Those poor boys.

I feel almost cured Chickie. I really do. Very nice and very beautiful. Thank you so very much for those lovely, healing boobs.

AmyD - You said exactly what I wanted to say to him but I was afraid of doing so. I did tell him that I thought I understood where he was coming from and that it was okay.

Mike - You're welcome. Anything to help!

Wow, if the people on the titanic had those they'd be alive today.

Your "dog in the bathroom" part reminded me of what I used to do to my daughter when she was an infant.

She had colic. Screamed for days straight.

If I didn't put her in there to muffle it every so often, I'd be in prison right now.

On a related note, my blog today ALSO has a note written by a child!!

Honey ya do what you have to do.
I so want to hear Tiny dog saying "meep meep". Maybe that will be my word for the day. "meep meep". I like it!
I feel so sorry for LB. That COAEW has no idea how she is and how she affects those poor boys. Probably doesn't care either. Bitch.
Poor Poor Sylvie! I hope the EB can make it up to her. You are NEVER too old for an EB visit. Ever.

The Phosgene Kid - Too bad that implants weren't popular back then. They could have been done to drown-proof someone before the trip.

moooooog35 - After I told Sweety this, the first thing he said was now he knew how I'd deal with a screaming kid. I wouldn't lock a kid where I couldn't see them. I'd put my earplugs in and sit them in the house while I sat outside and watched through a window.

Patti - I almost recorded Tiny but she sounded so pitiful. I didn't want the world to really hear what I had done to her. The COAEW is clueless. She thinks if she's happy then they should be happy too. I'm sure that E.B. will make it up to Sylvie. She's waiting for him!

AmyD said it all - in a nutshell. Having gone through the step-parent thing for many years I can bleed for your situation. I am so glad the boob shot made so many so happy. And YES I would have survived the Titanic with these horrendously huge boobs - I envy those with no burden at all. LOL

Poor LB, that does suck. That note to the Easter Bunny is too freakin' adorable.

Nice tits! I'm wncioua (that's envious, by the way, I was so distracted with envy, I had my left hand on the wrong set of keys! ;-)